What is Catheter Ablation for Atrial Fibrillation?

What is Catheter Ablation for Atrial Fibrillation?

Catheter ablation is a minimally invasive procedure designed to target the regions of the atria that allow the AF to initiate or sustain itself. It is more targeted than drug therapy which is why in every research trial published to date, it has been superior in efficacy to drugs in eliminating AF. This means that while there is no guarantee of success, there is a good chance that suitable patients will do well after an ablation.

Important measures that you can take to improve the chances of an AF ablation being successful are:

Prior to your procedure we will talk to you about the ablation the likely outcomes and risks for you. We will give you a consent form to take away, read and sign. Depending on whether you are decided yet and are having the procedure scheduled soon we may also arrange for you to have some blood tests and an MRSA screening swab (a requirement for all patients admitted to hospital in the UK). We will also ensure that you are on an anticoagulant drug.

Before the procedure the you will be asked to starved for at least at least 3-6 hours so that your stomach is empty and can be safely sedated. If the transoesophageal echo show that there is a clot in the heart (very unusual) then we delay the procedure for a few weeks to allow the anticoagulants to dissolve the clot.

The procedure may be done as a day case or as an overnight stay in hospital depending on the time that you have your procedure and your recovery. The local anaesthetic is introduced into the top of the legs and this allows us to pass the catheters into the veins.

Some people also suffer from atrial flutter as well as AF and for them we may also perform an ablation of the isthmus between the tricuspid annulus and inferior vena cava which will also prevent atrial flutter occurring after the procedure.

Anticoagulation is a key part in the management of AF because it helps prevent stroke, which is one of the major complications associated with AF. Anticoagulation although commonly termed thinning of the blood, doesn’t thin the blood at all. What these medications do is to make the blood take longer to clot. This means that if patients cut themselves while on anticoagulants then they will bleed for longer but are also less likely to form a clot in the heart which can then travel to the brain causing damage and a stroke. A common drug used for heart patients is aspirin. This appears in major trials to have a similar bleeding risk to other anticoagulants like warfarin, but because it has a different method of action, it does not have the stroke prevention effect (it is good at preventing heart attack but not AF related stroke). Therefore if people take aspirin for stroke prevention in AF they are taking all the bleeding risks but getting none of the benefits of protection. The good news is that there are now a range of anticoagulants available that work very well to prevent stroke in AF.  Not all people with AF require anticoagulation any or all of the time, we will be able to advise you individually.

The anticoagulants commonly used at the moment include warfarin, dabigatran, apixaban, and rivaroxaban.  The latter three are collectively termed DOACs (direct oral anticoagulants) and used to be called NOACs (novel oral anticoagulants – this term is now falling out of used because they are not novel any more).

Warfarin is the drug with the longest history, but does require regular blood tests to ensure you are receiving the best dose for you. This is because its action varies from patient to patient and over time because many things can influence its behavior like changes in diet. Patients often have arrangements at a clinic or hospital close to where they live or work for this, but if you do need help with the monitoring and management of your medication we have a team of teaching hospital consultants who can look after you.

The DOACs do not have the variation in behavior that warfarin does and so they do not need regular blood tests to monitor their effect. There is now increasing evidence that the DOACs may be associated with a lower risk of bleeding in the brain than warfarin and they are becoming increasingly used as the treatment of first line.

We have pioneered research in the use of these drugs to protect patients during ablation and now do all of our ablations on these drugs without interrupting them. We have found that the risk of bleeding complication is actually less when using these drugs than when interrupting them and replacing them with short acting injections. The additional benefit is that patients spend no time without the protection of an anticoagulant and this may explain why our stroke rates are some of the lowest in the world.

If you have persistent AF (AF that does not stop on its own without treatment like a cardioversion) we may also recommend a short course of amiodarone to start a week or so before the procedure and to continue for 3 months after. Amiodarone is a very effective anti-rhythm drug which is not used routinely for long periods of time because of its potential to cause long-term cumulative side effects like thyroid problems, liver and lung fibrosis. These are not common in short term treatment.

On the Day of the Procedure

On the day of the procedure we will admit you to hospital and ensure you are ready for the procedure. If you are having the procedure under a general anaesthetic one of our anaesthetists will see you on the ward before your procedure starts.

You will be taken to the operating room known as the cardiac catheter lab and the last of 3 or 4 safety briefs and checks will take place with you and the rest of the team to ensure that everyone is happy with what the plan is and everyone knows their role in it. It is also an opportunity to check yet again that you have no allergies and are prepared for the procedure.

We will then sedate or anaesthetise you and put a local anaesthetic at the top of the leg so that when you wake up your leg is not sore.

Once you are asleep we may also pass an ultrasound probe down your throat to do a detailed ultrasound of the heart (known as a transoesophageal echo (TOE)). This allows us to check the heart for clot and in some patients totally eliminate the use of x-rays for your procedure.

At present for paroxysmal AF (AF that stops without needing an electric shock or cardioversion), we use a cryo (fr 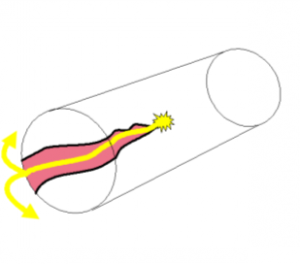 By electrically disconnecting these veins from the heart (while leaving the “plumbing” unaffected) we can eliminate AF in the majority of patients. We use the cryo balloon because we were the first in the world to show in research studies –https://www.ncbi.nlm.nih.gov/pubmed/26727045 that this is superior to radiofrequency burning in eliminating AF in patients with paroxysmal AF.

This video shows a cryoablation balloon in the right lower pulmonary vein. X-ray dye is being injected that is spilling out (so the vein is not completely occluded by the balloon yet). The dots to the left of the balloon are electrodes on a fine mapping wire passed through the balloon and into the vein. These allow us to record electrical signals during the freeze. These signals will disappear when the vein has been electrically disconnected (isolated) from the left atrium.

After the procedure an echo-cardiogram is performed to make sure that fluid has not leaked out of the heart. A pressure pad is applied on the leg and the tubes removed. The patient is then returned to the ward for close monitoring by the nursing staff. They will ask you to lie flat for a period of time to allow the leg to heal properly. Once a clot has formed over the vein at the top of the leg, to seal it off, the pad is removed and you will be gradually mobilised. If you have bleeding problems after some patients need longer in bed to heal than others and rarely we will keep patients in hospital overnight for this reason.

Risks are low. Minor complications (defined as something that does not need treatment and does not delay discharge home) including bruising, chest pain, recurrent AF (for a few weeks which then will often settle down), temporary damage to the nerve that supplies the diaphragm or stomach (lasting a few weeks or months before it resolves).

It is not unusual to have symptoms of chest pain and palpitation after the procedure. Even if atrial rhythm problems occur these, can often resolve on their own after 3 months. We are not sure why this happens but it seems likely that inflammation of the atrium following the ablation can be one of the reasons.

For persistent AF, a more extensive ablation may be necessary which the cryoballoon can’t achieve. For this reason we use RF energy. Professor Schilling uses a robot to ensure that his ablation lesions are placed accurately in order to achieve the best results. There is only one study https://www.ncbi.nlm.nih.gov/pubmed/25220575 that demonstrated superiority of the robot over manual ablation so many other operators do not use this technology as a routine. We also use a 3D mapping system which allows us to create a computer model of the heart (hyperlink to video here) and place the lesions with great accuracy and avoid the use of X-rays. Indeed, professor Schilling has pioneered X-ray free AF ablation.

Professor Schillings group was one of the first in the world to demonstrate that performing ablation on anticoagulant drugs is actually safer than interrupting them. For this reason we will ask to remain on your stroke prevention medication throughout the time of the procedure and for at least 3 months after.

Professor Schilling regularly has his own results audited and publishes them. This allows him to make subtle changes to his technique to refine and improve these outcomes.

As you can see from his results, some patients need more than one procedure to get the best results.